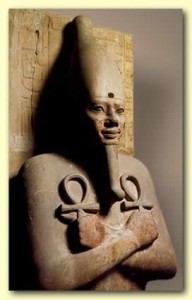 The concept of archetype is at the foundation of our astrological language. Generally speaking, an archetype can be defined as an image that is an original model after which similar things are patterned. A related meaning is an ideal example of a type. For example, the god Venus in Greek mythology embodies an ideal of beauty, which in more attenuated forms can be found in various things and people—a beautiful dancer, painting, song, or sunset. Each is “full” of the archetype of beauty.

Philosophically speaking, archetypes can be likened to what Plato described as Forms or Ideas that exist as pre-patterned impulses in the mind of The Good—the ultimate state of reality. These Forms were thought to be alive and purposeful, yet existed in realms too subtle to be detected by the senses. Since they could only be known through their effects, the various qualities of the phenomenal world were thought to be derived from these Forms. Beauty, for instance, could never be encountered in itself, but only as a property of some concrete thing that is beautiful. Where objects were ephemeral, qualities endured; the qualities evident in tangible objects being but fragile attenuations of the more intense and stable condition these Forms enjoyed on their own plane.1

According to Carl Jung, an archetype is a universal thought form that structures and animates the collective unconscious, which is that layer of the psyche that we share with all humans. These collective dynamisms manifest as primordial images and themes that can be found everywhere at all times: in myths, fairy tales, religious motifs, dreams, and everyday life. While an archetype clothes itself in imagery that is familiar to the time and place in which it occurs, its meaning is the same across cultures. As universal thought forms, archetypes are the organizing principles of reality itself.

Psychologically speaking, archetypes are not only part of the objective psyche—the larger consciousness in which our lives are embedded—they also constitute the root motives of the human psyche. Jung referred to the archetype as “the self-portrait of the instinct,” by which he meant that archetypes, as primordial images, symbolize structural elements of human consciousness. Basic patterns of mental and emotional behavior are thought to be derivatives of archetypes.

Archetypes not only organize the psyche within, they also connect us to the world outside. As a non-local, formative field, an archetype can appear in the environment as an event, person, or situation that is synchronistically related to the experiencer. Reduced to their essence, archetypes are best described as universal organizing principles inherent in nature. Just as vapor exists in an invisible state before it condenses into cloud, falls to Earth as rain, and further cooled turns to ice, so the energy of an archetype exists independent of its phenomena. It may manifest in humans as need, become known through behavior, and culminate in event; yet, in principle, it precedes all these things. An archetype is like an invisible pattern of energy to which the shape and behavior of matter visibly conforms.

Astrological Archetypes As Geometric Forms
All of the above is a pretty good way to think about astrological archetypes, too, except that in astrology an archetype can be differentiated into various related parts. Terms such as sign, planet, house, and aspect are all facets of a single astrological archetype. A sign is the archetype in its motivational mode, a planet is its action mode, a house is its contextual mode, and an aspect is its relational mode. For example, Libra is the need for beauty, Venus is the action to beautify, the 7th house is a context within which beauty is a primary theme, and the opposition is a dialogue between two planets that requires beautifying—that is, reconciliation of opposites into a harmonious whole.

Note that all but planets derive their meaning from angles. The meaning of Libra is derived from its position in the zodiac as a 30-degree segment of the ecliptic starting at the autumnal equinox, which is 180 degrees opposite the vernal equinox. Whereas the vernal equinox marks the first day of Spring and thus the beginning of the zodiac, the autumnal equinox marks the start of autumn when days are nights are again equal, or balanced.

The 7th house, likewise, signifies a 2-hour period during the earth’s 360 degree axial rotation that ends at sunset (the completion of the day) — or, 180 degrees opposite sunrise (the start of the day). If sunrise can be thought of as marking the beginning of the earth’s 360 degree rotation at a particular locale, then sunset marks its half-way point. Here again the 180 angle is the operative principle.

An opposition denotes a phase in the synodic cycle of two planets when they reach a point that is 180 degrees opposite one another. This point in time is the polar opposite of the beginning of their cycle, when the two planets were conjunct. As such, it signifies a quality of relationship that is similar in meaning to Libra and the 7th house.Again, all these meanings—sign, house, and aspect—are based on the same 180-degree angle, which is a phase within a more encompassing 360-degree cycle. As such, it is a geometric form, or Platonic Form, as the case may be. Perhaps the primary exemplar of this archetype is the zodiacal sign of Libra, for it most clearly illustrates how astronomical angles correlate to astrological meanings. Just as days and nights are “equal” at the autumnal equinox, which Libra inaugurates, so the principle of equality is the foundation of fairness, harmony, and beauty, which are Libra’s predominant themes. Here we see an exact astronomical correlation with an archetypal principle.

As stated previously, an archetype is an image that is an original model after which similar things are patterned. The astronomical angles we call signs are, in fact, original models that provide a pattern for related phenomena. A 180-degree angle, for example, forms the basis for all similar phenomena that embody a pattern of balance and relatedness. This pattern can be found in persons, things, places, and events that give expression to the principle of harmony. A diplomat, a contract, an art gallery, and a marriage all exemplify in different ways the 180-degree angle we call Libra. Here again we see how an astrological angle, or geometric form, is quite literally an archetype.

Although different manifestations of the 180-degree archetype are referred to by different astrological terms—sign, house, and aspect—each term is similar in meaning. Again, Libra can be thought of as the need for harmony; the 7th house is a context within which harmony is the prime concern; and the opposition signifies a relationship that requires a harmonizing of separate but related functions (planets). As the ruler of Libra, Venus is the actional mode of the 180-degree archetype, for it signifies the act of harmonizing. In this regard, planets embody the action dimension of archetypal principles.

In summary, astrological archetypes are phases of a 360-degree cycle, thus angles. Each phase of the cycle is associated with a different principle of life—beginnings (Aries), foundations (Cancer), complements (Libra), crises (Scorpio), culminations (Capricorn), endings (Pisces), and so on. For this reason, each sign derives its core meaning from its angular relationship with the beginning of the cycle, zero degrees Aries. It is fascinating to ponder how these astronomical angles, created by the cycles of the planets, have been incorporated into the human psyche as patterns of emotional and mental behavior. As organizing principles of reality, astrological archetypes are objective and subjective, outer and inner, the very nature of nature itself.

Why The Sidereal Zodiac Is Probably Wrong
As every astrologer knows, there are two different zodiacs currently in practice—the tropical zodiac based on the seasons, and the sidereal zodiac based on the constellations that once formed a backdrop to the seasons. It is worth noting that only the tropical zodiac is rooted in the annual cycle of the Earth about the Sun, which is what gives us our seasons. The mechanics of this involve two intersecting planes—one derived from the equatorial plane of the Sun (the ecliptic), and the other from the equatorial plane of the Earth (the celestial equator), which is tilted at an angle of 23 degrees to the ecliptic. These two planes intersect at the Vernal Equinox (zero degrees Aries) and the Autumnal Equinox (zero degrees Libra). 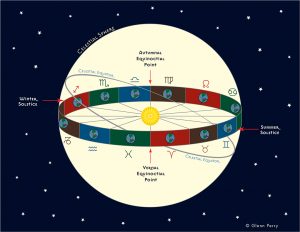 While much could be said about the intersection of these two planes, the crucial factor is that the tropical zodiac comprises a series of angles formed from the ever changing relationship of Earth and Sun. Were it not for this annual cycle, no actual angles could form to produce astrological signs. The angles themselves—that is, the signs—are inseparably related to the orbital motion of the Earth about the Sun. Astrological meanings, therefore, are products of movements that produce angles—or, to repeat our axiom, all meaning is an angle.

The sidereal zodiac is thus unique in that the alleged meanings of its constellations are utterly unrelated to geometric angles, which, as we have seen, form the basis for astrological archetypes in their various forms—sign, house, and aspect. This alone, in my opinion, constitutes a powerful argument against the validity of the sidereal zodiac.