Missing the Forest for the Tree 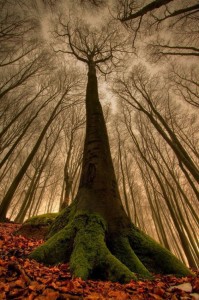 Having ventured into a deep wood of beauteous complexity, with a great variety of ecologically inter-dependent phenomena, I discovered an astrological colleague hugging a particular species of tree while shrieking with delight, “Eureka! I’ve found it! The final, ultimate, irreducible essence of forest!” You’ll forgive my metaphor, but it serves to illustrate what I call “Astromyopia” —a visual defect in which the complex whole of the horoscope is collapsed into one or more parts.

Astromyopia is the astrological equivalent of nearsightedness. Unable to reason from the part to the whole, the astrologer simply stays glued upon the part while proclaiming it to be, “The most important factor in the chart!” This all-important factor might be the lunar nodes, Chiron, Pluto, black Moon Lilith, or some other esoteric object whose significance is exaggerated out of all proportion to the rest of the horoscope.

A person suffering from Astromyopia might look at the chart of former president George Bush and exclaim, “Look! Bush has South Node in Sagittarius. No wonder he was a war-mongering, colonialist demagogue who wanted to take over the world!” If one points out that Bush also has Sun in Cancer in the 12th disposited by his Moon which is conjunct Jupiter in Libra in the 3rd both of which are squaring his Sun while also trining Uranus in the 11th, our astromyopic friend might stare blankly and mumble something like, “Oh, yea, that, too.” Whoops. Unpacking that complicated configuration is, well, hard.

Another variant of Astromyopia entails shifting one’s attention from part to part within a single category of phenomena such as Sabian symbols, asteroids, or fixed stars. In this case, the astrologer focuses upon one piece at a time with no way of linking them together into more complex meanings. “Ohmigod! The Sabian symbol for Hillary Clinton’s Sun at 3 degrees Scorpio is: A house-raising party in a small village enlists the neighbors’ cooperation. Surely this explains the topic of her book, It Takes A Village!” Next, the Sabian symbol for her Ascendant is cited, then for her Moon, then her M.C., then…well, you get the picture. Each Sabian symbol, asteroid, or fixed star is looked at as an irreducible whole of meaning in isolation from every other part of the chart.

This kind of thinking makes astrology deceptively easy. The practitioner does not have to actually delineate the chart by combining parts into more complex wholes, for meanings are ready-made and spoon-fed. The sheer amount of Sabian symbols (360), asteroids (6000 and still counting), and fixed stars (numberless), virtually guarantees there will be something that appears to account for the salient features of the native’s life. Unfortunately, this approach also trivializes the object of our study—the human being.

To be sure, many practitioners specialize in particular areas of astrology while also recognizing the central importance of the chart as a synergistic whole. Lynda Hill is an expert on Sabian symbols. Bernadette Brady is an aficionado of fixed stars, Grazia Mirti knows all about black Moon Lilith, Melanie Reinhardt emphasizes Chiron, and Michael Lutin is an authority on the nodes. These are all stellar astrologers who, in addition to their areas of specialized expertise, also recognize the importance of interpreting the chart synergistically. The issue here is not whether singular factors in the chart have significance, but the extent to which focus on them can be an anxiety-reducing substitute for the more difficult task of chart delineation. As a style of interpretation, Astromyopia may simply be a way of managing the inevitable anxiety that accompanies looking at the chart as a whole. Let’s face it. Astrology is hard. If you don’t have a talent for abstract, symbolic thinking and a capacity for synergizing vast amounts of data into coherent, intelligible wholes, you might want to consider a less demanding field.

In contrast to a synergistic approach, Astromyopia is reductionistic. Wholes are reduced to parts, which are then assigned unrealistic and exaggerated importance as determinant factors in a person’s life and character. Of course, the most flagrant example of Astromyopia is Sun-sign astrology. The complexity of the individual is collapsed into a single sign. He or she is an Aries, or a Taurus, or a Gemini. On this basis, all manner of advice is given about relationship compatibility, vocational aptitudes, personality traits, health matters, and so on. Yet, we all know that signs are not people; they are parts of people.

Sun sign astrology is the equivalent of a medical practice that focuses exclusively on the condition of one organ, such as the liver, as if nothing else is relevant to a patient’s health. Can you imagine going to your doctor for a general check-up and he dryly prognosticates, “Well, you’re a Liver, and Livers are good at waste-product removal and bile secretion, which is why you’ll never be a big hit with opposite sex, but you’d make a terrific sanitation engineer.”

I don’t mean to pick on Sun-sign astrology. It has its place. The point is that Sun-sign astrology is merely one example of Astromyopia. We could just as easily be talking about the lunar nodes, Chiron, or any other favored element that astrologer’s look at with tunnel vision.

To be fair, Astromyopia is probably unavoidable at early stages of one’s development as an astrologer. Before learning to combine parts into more complex units of emergent meaning, there is a tendency to assume that salient features of a person’s character are products of singular factors. Yet, this interpretive myopia is not limited to neophyte astrologers. It persists in many of us for the simple reason that learning to interpret a chart as a complex, interdependent whole is extremely difficult.

The essential feature of any horoscope is the dynamic relations between its parts. Planets in sign, house, and aspect symbolize the myriad drives, functions, conflicts, and defenses that combine to produce that emergent quality called personality. This property is not contained in any single part of the chart—it is not the Ascendant, Sun, or Moon sign—but emerges out of the way the chart is organized, lived, and integrated as a whole.

In my opinion, this principle applies to any chart meaning of real significance. Nothing of importance is contained in a singular factor, but rather emerges from the interaction of two or more chart components. This interactive, integrative process is what makes us individual. It is also what makes individuals only relatively predictable.

After thirty years in the field, I am increasingly aware that human behavior is largely indeterminate—that is, not determined in advance by external (planetary) factors. It is our freedom to choose and our capacity for integrating parts into functional wholes that ultimately determines who we are. Accordingly, the more parts of a horoscope that an astrologer can combine into a comprehensive, multi-layered story, the closer s/he comes to understanding the real person. Reading a chart is like putting together the pieces of a large and complicated puzzle. Astrology is hard even while it is fun and aesthetically satisfying.

One way that misguided astrologers attempt to manage the anxiety of complexity is to keep adding more singular factors to the horoscope. This is like adding extra pieces to a puzzle without actually putting the pieces together. If there is something about a person that can’t be explained through the astromyopic approach, simply include more stuff—more asteroids, more fixed stars, more midpoints, imaginary planets, Arabic parts, centaurs, antiscia, and on and on. Of course, if you put in everything, you end up with a big black blob of nothing, for there will be no space left to differentiate one factor from another let alone integrate them.

The obverse (traditional) approach, yet equally myopic, is to reduce the chart to fewer and fewer components—get rid of the outer planets, Chiron, nodes, asteroids, and anything else that clutters up the chart—then tie the few remaining parts together via fixed rules that eliminate any possible ambiguity. Again, this approach assures that you don’t have to do much thinking for yourself; the simplicity and precision of the model does it for you. I call this AstroFundamentalism. Is the ruler of your 7th house in your 6th house? That’s easy; you’re going to marry a servant. Is the ruler of your 7th house Mars? After you marry your servant, he’s going to kill you. Is Mars in Pisces? His method of attack will be poison. Simple. Clear. Wrong (probably).

Anyone who does astrology long enough will realize that this kind of rule-bound, formulaic thinking reduces the chart (and the person) to a singular manifestation, as if there can be only one expression for the chart. This is an example of what the eminent philosopher Alfred North Whitehead termed “the fallacy of misplaced concreteness,” which is confusing a concrete thing (event) with the abstract category of meaning that it exemplifies. In other words, an astrological configuration is not so much an outcome as a process that can manifest in a multiplicity of events depending upon how it is situated in the chart as a whole and, more importantly, the degree to which it is integrated.

The fallacy of misplaced concreteness occurs every time we settle on a single outcome as the meaning of an astrological configuration. If the significator of your 7th house is Mars in Pisces in the 6th, you may indeed marry an angry servant who poisons you, but this is only one of many possibilities (thankfully!). The actor Denzel Washington has this configuration. According to his biography, he’s been married to the same woman for over thirty years, they have four children, and he has yet to be poisoned. By all reports, she remains an ardent helpmate and source of encouragement and inspiration for his work—which is another meaning of Mars in Pisces in the 6th.

Precise rules that predict concrete singular outcomes may allay our anxiety as astrologers, but they don’t make us good astrologers. The cognitive narrowing and shrinkage of meaning that typified the interpretive methods of ancient astrologers was understandable in light of their relative ignorance of the inner, psychological dimension of human beings. Certainty of prediction had a high premium in a dangerous world that seemed to offer few choices.

Yet, with traditional, event-oriented astrology, the most you can be is right. To actually be helpful, we have to have a tolerance for ambiguity and for what the poet John Keats called “negative capability”. This is the capacity for being in uncertainty without feeling undue pressure to arrive at a premature, intellectual resolution. If one has negative capability, mystery and doubt are honored as necessary parts of the consultation. Space is given for meanings to emerge organically out of the depths of interaction with the client. Rather than anxiously reaching for a specific, concrete interpretation, the astrologer accepts that planetary archetypes can interact, combine, and express themselves in myriad creative ways while still remaining true to their essential nature. This view holds that human behavior is archetypally predictable, but concretely indeterminate.

Of course, this does not mean that we should abandon precise, clearly formulated rules of interpretation. What it means is that we should not arbitrarily narrow the range of meaning that those rules allow. In subsequent columns, we’ll discuss how a clear understanding of the grammatical structure and syntax of the astrological language can allay the anxiety that accompanies recognition of a horoscope’s inherent complexity and indeterminacy.

To be your best,
let go of that tree.
Embrace the forest
In all its mystery!

← Evolutionary Astrology: Separating the Wheat From the Chaff Toward an Astrological Theory of Personality →