Father In the Horoscope

Students frequently ask what planet signifies the father in the horoscope, Sun or Saturn? Also, what is the relationship between father and other characters symbolized by these planets? 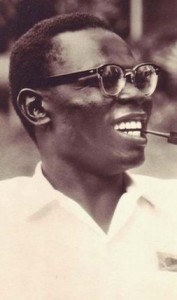 It is important to distinguish Sun and Saturn as representatives of father, for they signify different principles yet both are father-like in their own way. When identifying characters assigned to a planet it is useful to consider the underlying logic involved. Just as a planet signifies a set of functions that are designed to meet certain sign-needs, so the external characters that represent that planet are likewise in the service of fulfilling needs associated with that sign-planet system. The Sun, for example, is dedicated to meeting Leo needs for self-esteem, identity, and creative self-expression. Any characters that are instrumental in meeting these needs can be solar figures.

Sun as Father
Regardless of whether the chart is of a woman or a man, the Sun signifies father as your first best friend, playmate, and greatest fan. These roles are central to the development of self-esteem, which is the primary need of the Leo-Sun system. Ideally, the child sees herself reflected back as the gleam in her father’s eye. And just as the 5th house is associated with a number of different characters—romantic interests, bosom buddies, playmates, teammates, fans and admirers—so the Sun can signify these characters as well. In short, anyone who is a source of admiration, approval, and validation for one’s self-expression (choices, play, performance, creativity) can be a solar figure in the native’s life.

These characters are superimposed over the characters normally associated with the house that the Sun tenants. If the Sun is in the 6th house, for instance, then one’s servants, co-workers, employees, and workers in general can be solar figures—that is, sources of approval and validation. With his Sun in Leo in the 6th, U.S. President Barack Obama is frequently criticized for surrounding himself with sycophants on his white house staff. Views that express disagreement with Obama are notoriously unwelcome. In this regard, Obama is said to live in a bubble that insulates him from potential challenge. If one does a Google search for “Obama lives in a bubble” there are dozens of articles titled along those lines.

The problem with Sun Leo in the 6th is the sheer strength of the Sun in an environment that requires diligence, caution, and critical thinking. Having the Sun in its own sign in the 6th is like throwing a birthday party for yourself in the middle of a shift at a General Motors automotive plant. The workers may cheer and love you, but not much gets done. The assembly line comes grinding to a halt. One suspects that Obama’s approach to work is more about creativity and performance than solving problems with cool efficiency. In short, charisma may substitute for competence. 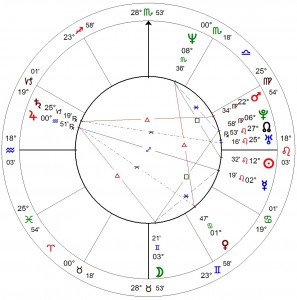 It is not just Obama’s Sun Leo in the 6th that accounts for his living in a bubble at work, but the fact that his primary solar aspect is a square to Neptune. As a psychological function, Neptune signifies our capacity for idealism, imagination, and fantasy. When square the Sun, this can translate as a penchant for living in a dream world wherein the self is perceived as extraordinary. Thus, one article is titled “Obama in Wonderland”, which captures the self-aggrandizing, solipsistic nature of his Sun-Leo square Neptune quality.

It follows that Obama is likely to surround himself with people who similarly distort reality in the service of an ideal. And since his solar square is to Neptune in Scorpio in the 9th house of law, it is not surprising that one of his best friends and staunchest allies, Attorney General Eric Holder, has been accused of fostering cover-ups out of loyalty to the president. Holder was cited for contempt of Congress when he refused to turn over documents related to a federal gun operation that led to the death of U.S. border agent, Brian Terry. More than 100 members of congress have called for Holder’s resignation over his handling of Fast and Furious, terrorism, and other matters.

Saturn as Father
All of this, of course, is completely different from Saturn figures that signify authority, limits, mastery, and such. Father as boss, rule maker, disciplinarian (tough love), taskmaster, and worldly success are some of the roles that are consistent with Saturn. Women/mothers can perform these functions, too, but archetypally they are more associated with fathers. Saturn’s sign, house, and aspects provide information as to how one’s actual father embodied these principles.

In Obama’s case, his Saturn is in Capricorn in the 12th house. The 12th house association with sorrow and loss is consistent with the fact that Obama’s father abandoned his wife and child, eventually becoming an alcoholic and tragic figure in his native Kenya. It follows that Obama’s compassion for 12th house figures – the poor, underprivileged, victimized, dispossessed, and sick – at least partly derives from his perception that their Saturnian capacity is weak or missing, for that is the condition of his own Saturn.

Obviously, one does not become president of the United States without a somewhat functional Saturn. However, this should not detract us from recognizing that Obama’s supreme ambition is to minister to those who appear to lack a capacity for success without government assistance. Accordingly, Obama’s administration is renowned for having significantly expanded unemployment and disability benefits. Welfare payments have jumped 32% during Obama’s presidency; food stamp recipients have nearly doubled over the last six years. Obama’s signature achievement is the restructuring of the health care system to provide a safety net for individuals unable to obtain their own health insurance. In short, Obama’s Saturn is largely employed in the service of those who appear to be lacking or missing their own Saturn function.

Pointing this out is not meant simply to be critical. All things considered, Obama’s overriding ambition to help the underprivileged is an admirable use of Saturn in the 12th. At higher levels of integration, the best and proper use of any difficult configuration is to employ its energies in the service of helping those who are mired in that same planet’s lower level expression. Despite one’s best efforts, however, any planet in the 12th can manifest problematically in the form of characters who embody that function poorly and who directly impact one’s life. Sometimes there is simply no escape.

One of Saturn’s primary roles is that of expert, master, and authority. When placed in the 12th house, the people that perform these roles may be absent or dysfunctional, just like Obama’s father. It is noteworthy that the alleged experts that Obama has relied upon to build and administer the Affordable Care Act have largely failed him. From the disastrous rollout of the website to the constant changes within the law itself, Obamacare has been described as a “nightmare,” “train wreck” and “chaotic mess” by members of his own party.

Likewise, endless confusion over the Benghazi tragedy, IRS scandal, and NSA leaks has reinforced the view that public officials within the Obama administration are either incompetent or deceitful. All of this has contributed to the widespread impression that Obama’s presidency is itself dysfunctional. Yet, when pressured to take responsibility for his administration’s failures, Obama appears insulated and clueless. The joke circulating about Washington says it all. Question: What did the president know and when did he know it? Answer: Not much and about a minute ago.

Conclusion
The point here is not merely to pick on Obama (of course, I am), but to demonstrate how Sun and Saturn can signify various characters that reflect the native’s own capacities vis-a-vis those planets. Recognizing that Sun and Saturn not only symbolize psychological functions within the individual but also characters that perform specific roles in the native’s life helps us to appreciate the synchronistic nature of astrology. As within, so without: fate is character turned inside out.