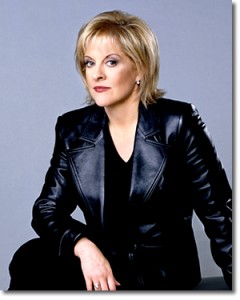 Student: Last night’s discussion was really interesting. Thanks! When you asked what type of philosophy Saturn in the 9th might represent, my instinct was that it would be “Realism,” since Saturn is about concrete, sometimes harsh, cold reality. Saturn might be a realistic philosophy. Just wondering your thoughts about that.

Glenn: I think your instincts are correct. My poster child for Saturn in the 9th is the tough-as-nails, former prosecutor Nancy Grace, who never lost a case. I don’t have Grace’s birth time so am uncertain if she has Saturn in the 9th, but she does have Saturn in Sagittarius, which works in a similar way. Also, she has Jupiter in Scorpio, which befits her focus on criminal law. Grace currently works as a legal commentator and hosts her own cable news show.

Remember, a planet’s behavioral choices are always in the service of the sign it rules. That is why it is so important to know the motivating sign-need behind a planet’s action. Motivation influences awareness through the agency of attention. It determines what that planetary function attends to—thus, what is noticed and what is ignored. And because experience tends to follow attention, a planet’s motivation will also influence how events are shaped synchronistically.

A planet’s motivating sign-need determines the meaning one attributes to house phenomena and ultimately how one decides to act within that environment. If Saturn’s motivation is structure, control and success in tangible terms (Capricorn), then its position in the 9th would incline it to value philosophical doctrines that are grounded, realistic, and can be used for practical ends. With regard to civil law, Saturn would probably take a hardline position; any rise in crime will be perceived as a consequence of excessive leniency or tolerance, the solution to which is tougher laws and more stringent consequences. Of course, if Saturn is in conflict with other planets via hard aspects, it might be projected onto legal, political, or ideological authorities that one rejects because of their Saturnian tenor.

Motivation shapes attention in accord with the governing need. With Saturn in the 9th, one is motivated to find evidence that confirms Saturnian presuppositions about the nature of truth, religion, philosophy, justice, and other 9th house phenomena. This might incline one to anticipate that the dispensing of justice will be harsh. Experiences that conform to one’s expectations will be noticed more than those that do not—or, when events go against expectation, one is apt to be alarmed and will redouble one’s efforts as an advocate for Saturnian justice.

If there are sufficient soft aspects to Saturn, indicating a lack of conflict, then one might be attracted to tough prosecutors, like Nancy Grace. With regard to international relations, the person might be an exponent of political realism—a view that prioritizes national interest and security over ideology and moral concerns.

Further information can be derived from Saturn’s sign position. Saturn in Scorpio in the 9th might be attracted to economic (Scorpio) theories (9th) that are innately conservative and that recognize the principle of limited resources. Note that economics entails measurable phenomena that can be evaluated according to standards, which Saturn likes. Saturn in Aquarius in the 9th might be attracted to conservative political theories like libertarianism that stress the importance of freedom from government interference. Statistics that demonstrate how a free press and free market makes a culture more prosperous and its citizenry more content would be utilized, again, because anything that is measurable according to a standard is intrinsically valued by Saturn.

Of course, this is just scratching the surface because Saturn in the 9th would also shape one’s approach to higher education, religion, ethics, and even marketing/advertising. Unless you know a planet’s motivation, you are apt to miss the forest for the trees. The multiplicity of outcomes that flow from a planet’s sign and house position all derive from the underlying motivation of that planet. As always, the goal is to find the archetypal singularity within the phenomenological diversity.

Bottom line: Knowing a planet’s motivation can simplify and focus your assessment of how that planet functions in a given sign and house.

Students interested in this approach to interpretation might wish to purchase my book, An Introduction to AstroPsychology.