The Concept of Integration 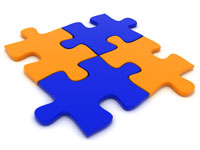 Student: I often hear the terms ‘individuation’ and ‘integration’ used interchangeably. How can you define the concept of integration? And what is the difference between integration and individuation?

Glenn: These are excellent questions. First, let me discuss the concept of integration because it leads to individuation. Psychologically we can define integration as the process of developing and coordinating personality elements into balanced units, leading ultimately to a balanced whole. To the extent that one achieves integration, intrapsychic and interpersonal conflict is reduced. Astrologically, the concept of integration is most pertinent to planetary aspects. It involves 1) fuller development and differentiation in conscious awareness of planetary components; and 2) their subsequent coordination and balancing within the self.

Successful integration yields new, higher level abilities—emergent properties—that result from a successful blending of planetary energies. If integrated, a hard aspect between Mars and Venus no longer connotes a conflict between needs for autonomy and intimacy, but rather a vibrant approach to love graced with rapscallion charm, yet which also allows for assertion, negotiation of differences, and resolution of conflicts as they arise.

Planetary aspects can vary in expression along a continuum of possibilities, with integrated expressions at one end, and disintegrated expressions at the other. Individuals evolve along this continuum of potentiality, unfolding higher possibilities over time. Since the astrologer cannot know how an aspect is manifesting until s/he talks to the client, it is imperative that astrologers take the time to know their clients and to provide interpretations that express an appropriate range of meanings.

The English poet Coleridge said that a work of art is rich in proportion to the variety of interdependent parts which it holds in a unity. We can apply this to the psyche as well. As Yogi Berra put it, “It’s Okay to have butterflies, just make them fly in formation!”

Individuation implies integration, but it refers to a holistic process encompassing the entire psyche, not any particular part or aspect; thus, Jung refers to ‘the journey of individuation’ as that of becoming an indivisible whole over the course of one’s life. The term ‘integration’, on the other hand, can refer both to the strengthening and coordination of particular components and to a process of integrating the chart as a whole. If used in this later sense, of course, the meaning of integration is virtually identical to individuation.

← Edward Snowden Birthchart The Zodiac as Archetype of the Self →