The Jig is Up, You’re Down

No doubt some of you have read the news on Elon Musk of late. Only 47, Musk is the founder, CEO, and lead designer of SpaceX, the private American aerospace transportation company whose goal is to reduce space travel costs and eventually enable the colonization of Mars. For most of us, this sounds like the stuff of fantasy. But Elon is also the co-founder, CEO, and product architect of Tesla Motors, a multinational corporation that specializes in electronic cars, one of which was famously launched into space by a Musk rocket. How’s that for expanding your market? Musk is a force of Nature. As of August 2018, he was reportedly worth $20.2 billion.

Even billionaires, however, have Saturn transits. According to a recent New York Times article, Musk’s Midas touch turned leaden in 2018, not surprising given that transiting Saturn has been opposing his natal Sun all year (exact on Feb 13, June 24, and Nov 13). 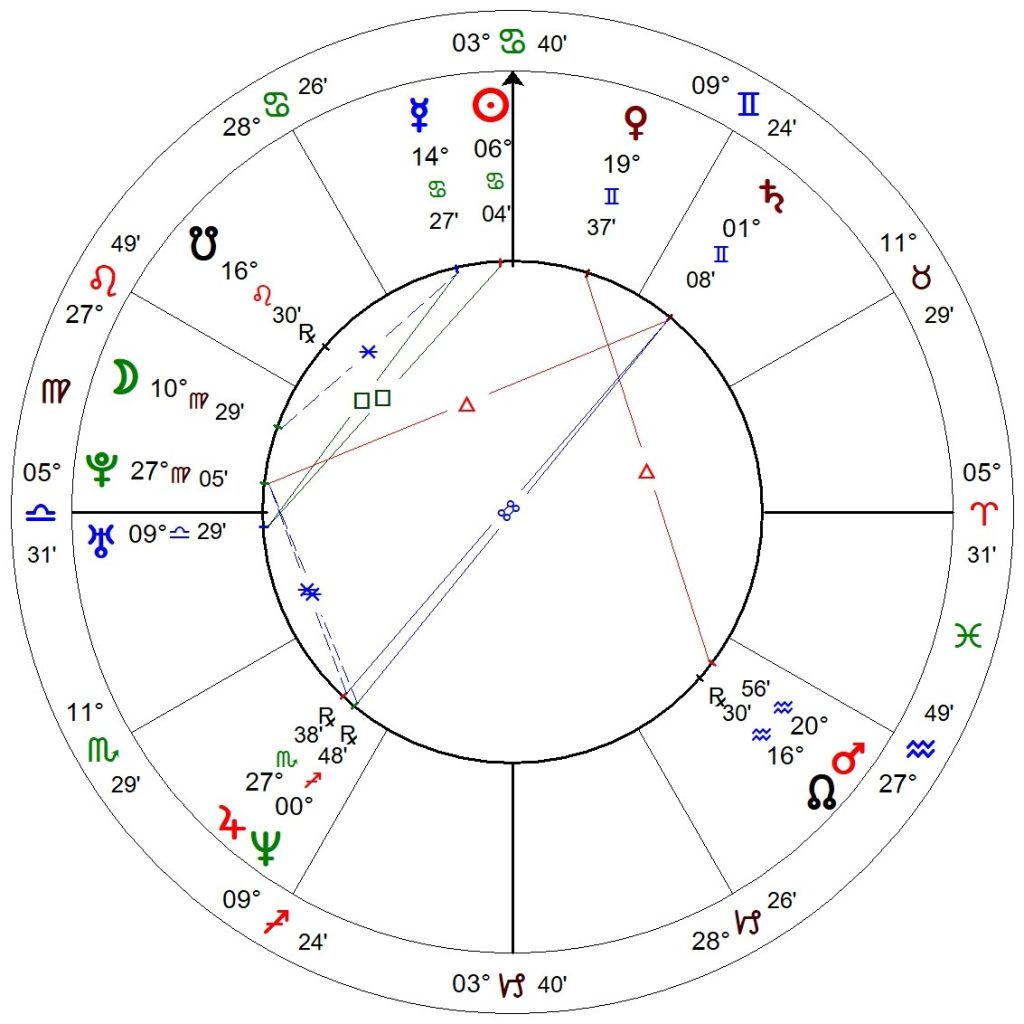 The Sun, of course, constitutes our capacity for free will, creative self-expression, and its affective component, self-esteem. When opposed by transiting Saturn―the reality principle or, as some would have it, the great god of depression―it is apt to signify a period when unbending authorities obstruct one’s intentions, formidable barriers retard progress, unrelenting pressure crushes the spirit, criticism rains down like hailstones, time is limited and dire circumstances force you to take stock, cut losses, and double down. Camus knew it as Sisyphus pushing the boulder up the mountain again, and again and again.

Life seems like an endurance test during this transit. You feel tired, worn out and old as your list of jobs seems overwhelming in comparison with your time and energy. There may be delays in your projects or simply a feeling that the fruits of your current labours are hard to see right now. It is a time to ponder on your priorities and discard any tasks that may be blocking your path, while shouldering responsibility in the areas which are important. Meditation may be useful. Certainly, it is a time to watch your diet and health.

Compare the above to a story from Investor’s Daily Edge, published on August 17th:

In a Nutshell: A bad week for Tesla’s CEO Elon Musk came to an end with the share price dropping nearly 9% on Friday. The fall came after a New York Times article that says Musk has gone through “the most painful year of his career” trying to get the Model 3 up to full production. In the interview, Musk admitted to using a sleeping aid and being under tremendous professional and personal stress. Earlier in the week, the Securities and Exchange commission announced it was looking into Musk’s tweet about taking the company private and multiple lawsuits were filed against the company.

The Payoff: Tesla shares have now fallen 20% since Elon Musk’s infamous “funding secured” tweet. If Musk’s tweet is to be believed, investors stand to grab a profit of 38% if Tesla is taken private at $420. If there’s no deal available to take the company private, there is the very real chance the company goes bankrupt in the next three to nine months.

As of this writing, the deal is off and there is no money available to take the company private, which could further erode Musk’s credibility and expose him to a fine for misleading investors.  Do a search for Elon Musk and you’ll find a hundred stories on his recent travails. A Vanity Fair headline says it all: “Elon Musk’s Week From Hell Ends With Tears”. Although Musk admitted during the NY Times interview that the past year has been “excruciating”, there is no relief in sight. In fact, things are getting worse. Musk says he’s working 18 hours a day, 7-days a week, and is stressed to the max from delayed production of his model 3 mass-market electric car.

The above is just a small sample of the trials and tribulations Musk has had to endure this year, though much has been self-inflicted. After a string of negative press targeting Tesla cars for their lack of adequate safety procedures, Musk admitted he was “frustrated” with the media and was contemplating counter-measures, which, in turn, caused backlash from journalists. With transiting Saturn opposing the Sun, it’s back and forth we go as the solar-ego instinctively defends itself against what seem to be harsh, unwarranted criticisms. All of this can be extremely deflating. And to the extent one has attempted to defy gravity―literally in Musk’s case (think SpaceX)―it can lead to a resounding crash.

Years ago, I remember reading a story in the San Francisco Chronicle about a city supervisor who jumped off the Golden Gate Bridge to his death. Living far beyond his means, he had led a profligate life that culminated in massive debt, legal troubles and imminent financial ruin. In effect, the jig was up, and he went down, preferring to smash face first into the icy waters of the San Francisco Bay at 80 mph than face the grievous consequences of bad decisions. The paper listed his date of birth. Sure enough, transiting Saturn was opposing his Sun.

Saturn moves slowly and generally retrogrades at some point, which means the transit is exact three times over the course of 9 months. Its opposition to the Sun occurs every 29 years to everyone; so, it’s not a common thing, more an extended reality check that hovers like a dark cloud blocking out the Sun for the duration. Lollipops and rainbows are in short supply, the air goes out of the balloon. Saturn says, come back to earth; it’s time to pay the piper. 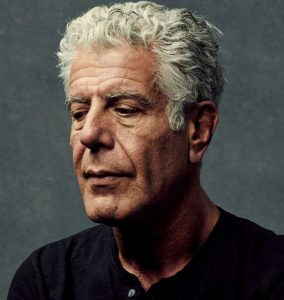 People have it at different times of their lives depending upon the Sun’s location at birth. The celebrity chef, Anthony Bourdain, had it this year, too. Like Elon Musk, Bourdain is a Cancer, with transiting Saturn opposing his Sun on January 22, July 25, and October 17. But Bourdain didn’t even make it to the 2nd pass. On June 8, his best friend, Eric Ripert, found him hanging in his bathroom, deader than a burnt steak. In what must surely be an understatement, Ripert reports, “Tony had been in a dark mood these past couple of days.”

Others claimed that his grueling, globe-trotting work schedule fueled a vulnerability to depression.  This would be consistent with Bourdain’s stressed Capricorn Moon and his Venus-Sun quincunx to Saturn (see Figure II). As a TV host and virtual one man show, Bourdain was a self-admitted workaholic who gave everything to his series, Parts Unknown. Ironically, Bourdain recently predicted he would probably “die in the saddle.” After his energy was exhausted, friends say he would simply collapse ― this time, off a chair with a rope tied round his neck. 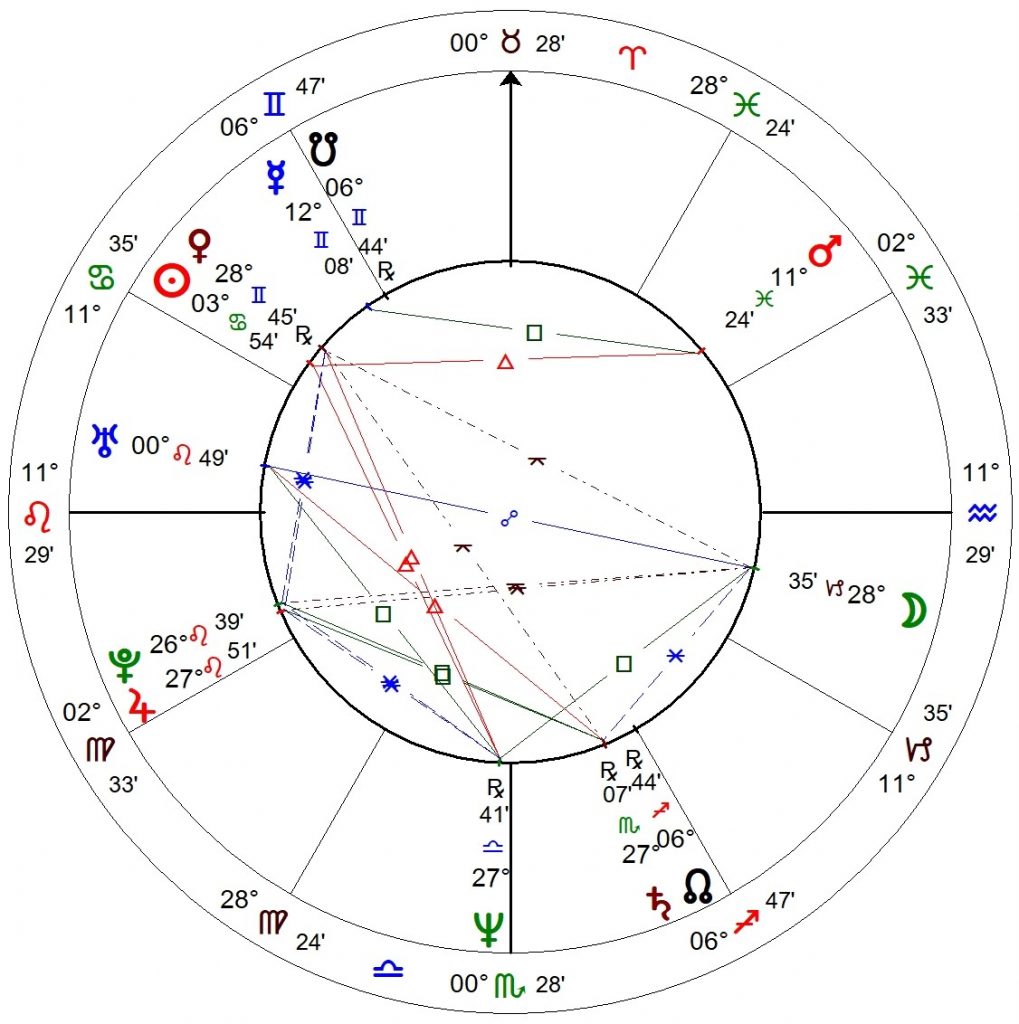 These rather grim examples give us pause to reflect that hard work and career success is no guarantor of personal happiness. If one’s life is out-of-balance and there’s no fuel left in the tank when Saturn comes round to visit, it’s like getting hit head-on by a twelve-ton truck just as you’re completing a marathon. Worse, the driver parks his rig on your chest for 9 months as the officials bicker over whether you actually crossed the finish line. Talk about adding insult to injury.

Of course, not every Saturn opposition to the Sun results in severe deflation. Like any transit, its effects unfold along a continuum from functional to dysfunctional. Transits are participatory things; we happen to them as much as they happen to us. For some, transiting Saturn opposed the Sun is simply a reality check and course correction that puts one back on the path to success. Others use it in collaboration with authoritative others (Saturn) to achieve a joint goal of weighty significance.

Results, both low and high, are contingent on the signs and houses involved as well as natal aspects the Sun makes to other planetary playmates. But mostly, outcomes reflect the level of integration operative within the person as a whole. If the individual needs work in forming a proper balance between Solar and Saturn functions, it will be a less than pleasant time. But if one is already on good terms with Saturn, the occasion, if not exactly a happy reunion, will at least provide a spur that quickens one’s journey up the mountain – and without the obligatory boulder rollback.

← Are We Free To Discuss Astrology's Real Problems? Planetary Goals with Case Study of Donald Trump →