The Wisdom of Defenses I have a client who has an aversion to new age teachings. Books like The Secret, which purport that we can all have a perfect life merely by thinking positive thoughts, send her up a wall. She regards such claims as Pollyanna fluff, a feel-good defense against the darker, meaner, more tragic side of life and a poor substitute for an authentic spiritual practice rooted in tradition. A healthy person, she argues, is able to face evil with courage, and can handle loss with grace. They do not resort to “spiritual bypass” as a means to avoid legitimate suffering.

She might be right. I’m reluctant to be an apologist for any teaching (even astrology), as all have their faults and failings. However, those doctrines that trigger our animosity are likely to be associated with some sort of wound or issue that goes beyond the teaching itself. 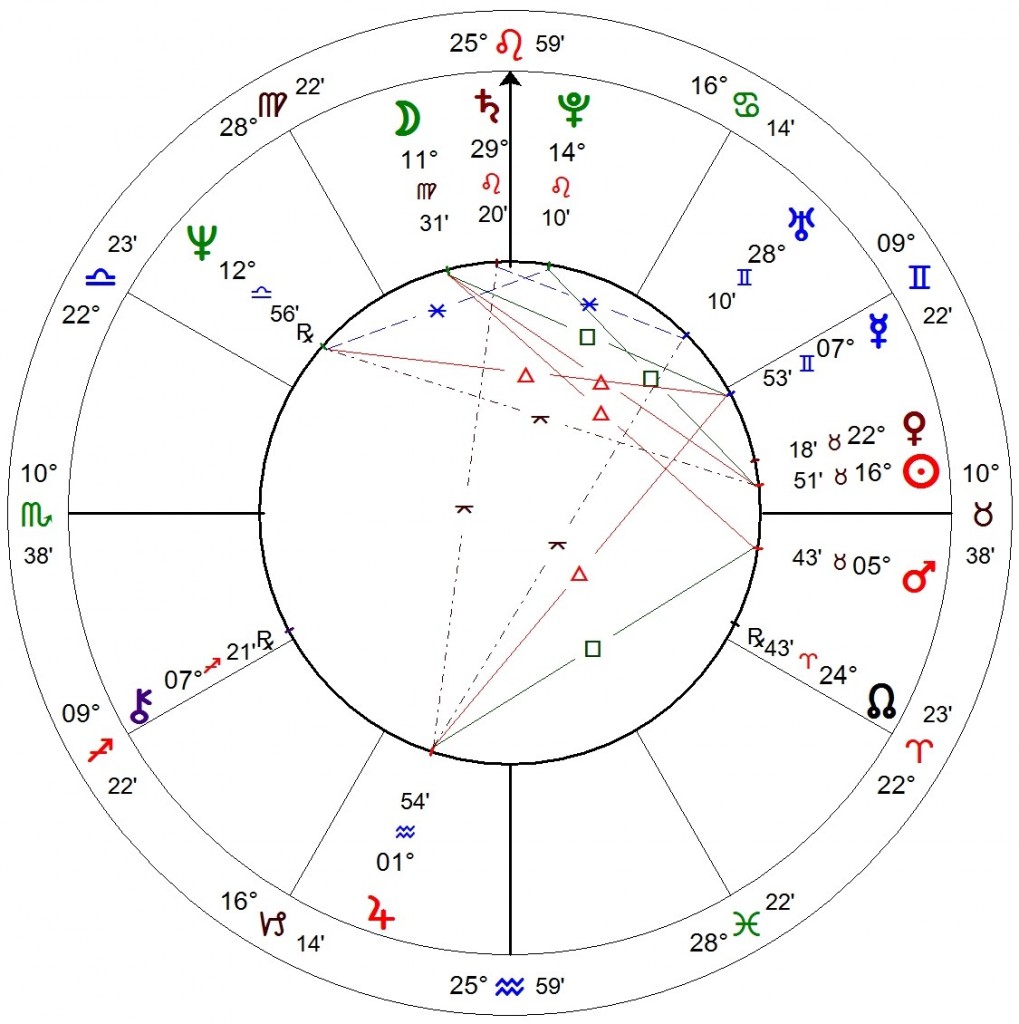 In this woman’s case, she has a Yod with Saturn sextiling Uranus and both planets quincunxing Jupiter in Aquarius. With Saturn in the 10th and Uranus in the 8th (but signifying the 4th), both Saturn and Uranus are parental indicators. To survive a harsh and unstable childhood with cold, abusive parents, she was compelled to rely upon her Aquarian Jupiter, the focal planet of her Yod, and the means by which she rose above the tragedy of her childhood by embracing age-old, universal truths embodied in Buddhism.

Her Jupiter in Aquarius was a bulwark of hope against a black tide of creeping despair. Under chronic pressure from circumstances symbolized by Saturn and Uranus, it hypertrophied into an overdeveloped but brilliant ally. Jupiter enabled her to find meaning in what were otherwise intolerable conditions. And it provided her with the overview and detachment that enabled her to see a purpose to her suffering, much like the Jewish psychiatrist and Holocaust survivor, Victor Frankl, who wrote an objective account of his ordeal in a German concentration camp in his famous book, Man’s Search for Meaning.

One could say that she resorted to Jupiter as a “spiritual bypass,” but I believe it would be more accurate to say that Jupiter served as a necessary defense against frightening childhood realities that threatened to overwhelm her. The point here is that Jupiter is associated with a childhood wound—albeit, as a defense against experiencing the full emotional impact of that wound. Accordingly, when she sees others resorting to a spiritual bypass to avoid pain, it stirs an awareness of her own emotional suffering that still, to this day, is partially bound and managed by her Jupiterian defense.

Her animosity toward spiritual short-cuts is an entirely understandable reaction. Intellectually she is fully cognizant of the necessity of facing emotional pain; yet, knowing this and doing it are two separate things. The resultant incongruity in her psyche creates cognitive dissonance, which she partially resolves by projecting onto “new agers” her own tendency to by-pass pain by jumping to a high-minded, philosophical perspective.

I suspect that most of us do something similar in an attempt to manage conflict. Any planet can be utilized as a defense against any other planet if that other planet is bound up with experiences that are painful or frightening. Like a bird furiously flapping its wings to escape the jaws of a leaping wolf, planetary functions shift into hyper mode—compensatory overfunctioning—to ward off experiences that threaten annihilation. The very chronicity of these defensive postures paradoxically allow for control and stability, thereby enabling a slower, dose by dose working through and integration of the painful, threatening experience.

I can provide another example from my own chart. My well-known opposition to reincarnational astrology is a reaction to the pretension of omniscience that resides at its core. I bristle at the unwillingness of its proponents to acknowledge the limitations of their knowledge in the face of an ineffable mystery—how karma is reflected in the horoscope. I associate such pretension with hubris and, ultimately, with deceit. Hubris, it seems to me, is a defense against dealing with real emotional pain—pain that originates in an unfathomable, bottomless void beyond our control and beyond the light of our intellectual formulations. We cannot avoid it by explaining it away with half-baked ideas, fantasy, and flights of the imagination.

That I grew up with an alcoholic mother who refused to admit her drunkenness (and pain), and a father and sister who refused to admit it, too, sensitized me to deceit and its companion, denial, in ways that make it difficult for me to respond with neutrality whenever I think I encounter it. I say think because I’m certain that on at least some occasions I confuse deceit/denial with fallacious reasoning, misguided idealism, or some other less virulent disposition.

On such occasions, my Moon opposition Mars is activated; old emotional pain (Moon Sag in the 8th) is triggered, to which I respond with Mars in Gemini anger—a guided missive at the heart of the offending ideas. Mars is my defense against experiences that stir lunar memories of deceit and denial.

But am I responding to an objective reality, or a subjective one?Am I merely projecting the deceit and denial of my family onto a family of practitioners—exponents of reincarnational astrology? Am I trying to get them to admit what my family could not?

In the immortal words of Steve Martin…Naaaah!

Just kidding, of course. Suffice to say my radar for deceit and denial has hypertrophied from childhood into a knee-jerk system of Martian self-defense; thus, I must exercise caution when assessing Mars’ signals. There’s no wisdom in shooting a sparrow that one mistakes for an enemy aircraft. In admitting this, I am not changing my opinion of reincarnational astrology. It is what it is. The fact that it appears large and menacing on my radar, however, says something about me, too.

One new age teaching, which I must admit has an intuitive appeal, is offered by Esther Hicks in the Abraham material. She says that the goal is not to avoid looking at the thing that upsets us; rather, we should strive to see it and feel good at the same time. This is a curious idea. It would seem to require that we stay grounded in our actual feelings, working to find a meaning that admits the truth of the perceived wrong while simultaneously placing it in a larger context that enables us to feel better about the thing perceived. Truth, in effect, is not a one-dimensional perception, but a layered phenomenon with lesser truths contained within greater.

The meanings that emerge from this exercise do not deny one’s pain, but make it bearable by placing it, slowly and painstakingly, into a more encompassing framework of compassion. As one’s thinking moves increasingly in a direction that feels good, emotions soften, the heart opens, and pain begins to evaporate. Growth toward an authentic, enduring happiness is a gradual process that requires effort and intention. In the interim, however, we need to honor the wisdom of our defenses.