The Zodiac as
Archetype of the Self 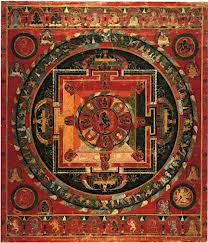 In a previous column we discussed Jung’s assertion that certain events occur as a consequence of an archetypal need being activated within the field of the psyche. By ‘archetypal need’, I mean any need that falls within the purview of a zodiacal sign. Needs for learning and communication, for example, are related to Gemini. Every zodiacal sign constitutes a grouping of self-consistent needs, which can be inferred from behavioral traits and themes that are characteristic of that sign.

Synchronistic experiences reflect the activated needs while also providing a vehicle for their potential satisfaction. In this regard, events are both symbolic and purposeful in that they seem to motivate the individual toward the development of certain universal values. One can decipher in the synchronistic event (as in dreams) an apparent evolutionary tendency of the unconscious. In effect, astrological archetypes symbolize both internal and external motivational factors; they impel behavior, manifest as events, and thereby motivate new behavior in a feedback cycle that assures the individual will continue to evolve by experiencing the consequences of his or her own internal states.
The phenomenon of synchronicity points to an intelligence in nature that actively searches for solutions to obstacles that block the continued unfoldment of life. This transformational process has a teleological quality and is consistent with perennial models that purport life is animated by transcen­dent Forms, or archetypes, which serve as formative patterns and universal ideals for processes occurring on lower levels. In an effort to conform to these patterns and to actualize the ideals they embody, creatures spontaneously organize themselves into states of increasing unity and integrity. This, in turn, is consistent with the perennial claim that living systems are drawn forward by the memory of a higher state of being from which they are descended, and to which they are destined to return.
While the zodiac describes a hierarchical sequencing of archetypal motivations, it is psyche as a whole that describes the master motive—wholeness or unity. This has been variously referred to as self-actualization (Maslow, 1968) or individuation (Jung, 1953), both of which imply that the psyche has a tendency to grow toward the fullest possible actualization of human potential. This tendency to develop in the direction of a stable unity is the central defining feature of Jung’s psychology. It was this conviction that underlay his assertion that the sovereign motive of human beings was individuation, Jung’s term for the intrinsic tendency of the psyche to evolve in the direction of psychic wholeness—that is, to be an indivisible whole. Both Maslow and Jung were proponents of a teleological theory of motivation that postulated some sort of unitive consciousness as the ultimate and final cause of behavior.
Just as Maslow postulated the drive for self-actualization, and Jung the path of individuation, there is an overarching motive implicit in the organization of the zodiac. As an integrated totality, the zodiac symbolizes the potential for wholeness. In effect, the zodiac symbolizes the archetype of the Self, which Jung defined as both the center and the circumference of the psyche. This definition echoes the German mystic Meister Eckhart’s description of God as a circle whose circumference is nowhere and whose center is everywhere. As the unity archetype and the organizing principle of the personality, the Self not only signifies the union of opposites within the psyche, but is also a God-image that symbolizes a wholeness toward which the psyche strives.
Here we see an obvious parallel to the zodiac, which has a center—symbolizing the individual—and a circumference symbolizing the 12-fold division of the collective psyche. According to Jung, the archetype of the Self incorporates within its paradoxical unity all the opposites embodied in the various archetypes. Likewise, the zodiac is composed of six archetypal pairs of opposites­—Aries/Libra, Taurus/Scorpio, Gemini/Sagittarius, Cancer/Capricorn, Leo/Aquarius, and Virgo/Pisces—which, once integrated, enables the individual to find a new center, a point of balance that allows for harmony both within and without.
Just as the archetype of the Self is depicted as a process of centering or as a process involving the union of opposites, so the zodiac symbolizes a process of integrating these polarized sign-needs into a unified whole. The Self emerges as the central archetype from the union of all other archetypes; as such, it constitutes a higher order category of archetype. The zodiac, too, constitutes a higher order category than the signs that compose it.
The emerging central archetype is often depicted in images of the mandala. In its simplest form, the mandala is a quadrated circle combining the elements of a circle with a center plus a square, a cross, or some other expression of fourfoldness. As such, the mandala symbolizes the Self, the archetype of totality. The zodiac also has a four-fold structure due to the sequence of Cardinal, Fixed and Mutable that repeats itself four times round the zodiac. Thus the zodiac is a quadrated circle combining the elements of a circle with a center plus a square.

In fact, the overwhelming majority of mandalas are characterized by the circle and the quaternity (see Figure 1). The circle and the square depict the inner and the outer aspects of life. The watery, fluid inner realm is round and signifies a state of flow, while the earthly world of substance is square and correlates to groundedness, or stability. 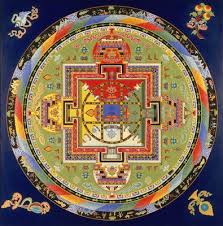 In the image above, note how the circle is contained within an encompassing square; another square is contained within the encompassing circle, and within that square is another circle, ad infinitum. Again, the circle of the zodiac also contains a fourfold structure, as determined by its four cardinal points that symbolize the beginning dates of the four seasons: Aries (Spring), Cancer (Summer), Libra (Fall), and Capricorn (Winter). Just as mandalas depict the inner and outer aspects of life, so each sign of the zodiac symbolizes an intrapsychic factor and a corresponding outer condition. These outer conditions serve as points of attachment, like ground stakes attached to tent lines that keep the tent centered in one place. Analogously, human beings become attached to people, places, and things, which ground their existence and provide the necessary stresses and strains to fuel an inner process of centering, or integration.
In alchemy, mandalas represent the synthesis of the four elements to produce the quinta essentia, the “Incorruptible One,” which represents the union of opposites necessary for the Mysterium Coniunctionis, or “inner marriage”. Jung considers the mandala image the preeminent symbol for the Self, the archetype of wholeness. Again, the zodiac can also be viewed as a four-fold whole, with its four elements of fire, earth, air, and water—all opposites—that must be brought into balance by finding a center.
Mandalas are ubiquitous across cultures and seem to represent a basic unifying principle that lies at the root of the psyche. Whether we call it the drive for self-actualization, the path of individuation, or depict it in the mandala of the zodiac, the message is the same: wholeness is the ultimate and final motive of the psyche to which all actual experience is subservient.
Because mandala images appear spontaneously in dreams and in certain states of conflict, Jung theorized that they represent an integrative factor. This idea receives support from Buddhism where mandalas function as ritual instruments that assist meditation and concentration. Likewise, the horoscope, by objectifying the psyche through zodiac symbols, provides insight into the nature of consciousness and the meaning of experience. Integration is supported by study of the horoscope because it provides an image of the psyche as a potentially unified (indivisible) whole. Reflection and meditation upon such an image can promote the process of individuation.
Jung (1960) describes how centering brings about a shift of power from the ego to the Self, thus enabling the individual to more readily surrender to a higher power that works through him. Because the Self, of which the mandala is a symbol, is the archetype of unity and totality, it is, therefore, the God within. The individual, in seeking Self-realization and unity, becomes the means through which “God seeks his goal.” By fulfilling his or her own highest potential, the individual is also fulfilling God’s will. This is why Jung felt that the individuation process was ultimately a spiritual journey.
All of this is implicit in the structure of the zodiac, which is a symbol both of microcosm and macrocosm, human and divine, part and whole. The prime dictum of astrology is, “as above, so below;” cosmos and psyche are mirror images of one another. Jung noted that the “quaternity of the One,” his mandala symbol for the Self, is likewise the schema for all images of God. Thus the innermost divine essence of man is characterized by mandala images that can just as well express a God-image, the atman that is Brahman. An astrological chart is an image of Deity—the Universe as a whole—unfolding within the consciousness of an individual human being.
Again, as symbols of the Self, mandalas seem to represent an integrating factor. Jung noted that when consciousness is confused, mandalas might emerge via dreams or fantasies as compensatory attempts at self-healing by imposing an ordered structure. When people are disoriented because of severe psychological conflict, the circular pattern of the mandala compensates the disorder of the psychic state—namely, through the construction of a central point to which everything is related. This can be interpreted as an attempt at self-healing on the part of Nature. The psyche instinctively produces a mandala image, which operates teleologically as a lure or a reminder of a potential wholeness yet to be realized.
Just so, the zodiac symbolizes a concentric arrangement of contradictory but reconcilable elements. It is precisely when people feel confused and conflicted that they often seek an astrologer. Like a mandala, the horoscope symbolizes the potential for integrating what appear to be irreconcilable parts into an ordered whole with a new center. For many people, the goal of a good reading is insight and integration, for the horoscope enables one to see that a disordered psychic state and corollary external conflict has a meaning that, once understood, can bring order out of chaos. Seeking a chart consultation may serve the same purpose as a spontaneous mandala image; it is the psyche’s attempt at self-healing. Perhaps the astrologer is employed by the client’s Self and used as an agent of that Higher Will. In this sense, every astrologer and every reading is potentially in the service of an evolutionary imperative that issues forth from a transcendent power—the God within and without.
In next month’s column, we’ll explore how planets are agents of wholeness, psychological functions that strive not only to satisfy their relevant needs, but also to combine with one another in ways that bring about ever increasing psychic unity.