“Nothing is better for self-esteem than survival.”
~  Martha Gellhorn 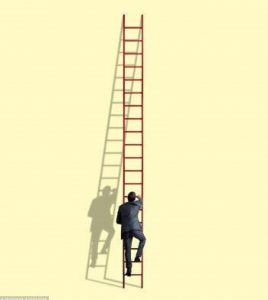 Transiting Saturn has been opposing my natal Sun Cancer for the past six months, so I thought I would share a few experiences that might encapsulate the meaning of the period. Overall, it’s been somewhat uneventful – lots of hard work, as one might expect, especially pertaining to Saturn’s sojourn through my 9th (work related travel experiences, building my school, collaborative relationships with marketing experts). I’m usually working hard anyway, so I’m generally on fairly good terms with Saturn. But over the past few days, Saturn has taken a somewhat ominous turn.

As we all know, Saturn rules limits, which can manifest as barriers, walls, obstacles, and so on. Saturn is our capacity to stay disciplined, slow down, and put on the brakes when necessary.  It also correlates to responsibilities, schedules, structures, bones and the skeletal system, especially the spine.

Ambition is another key function of Saturn, as in ‘climbing the ladder’, and ‘falls’ when one’s efforts to achieve or maintain a higher level prove insufficient. When opposing the Sun, Saturnian phenomena can challenge, and perhaps frustrate, solar intentions. Self-esteem can take a beating, and attempts at creative self-expression may flounder―that is, unless you’re writing something about Saturn. Then Saturn’s happy. But it better be real, as the grim reaper has no tolerance for anything less.

Like dreams, events in the real world often have synchronistic import. A given event may appear to have no particular significance; it’s just life as usual. But when deciphered through the language of astrology, it can be revealed to have a numinous, symbolic meaning. 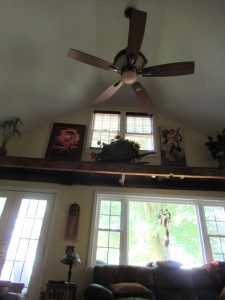 Yesterday I was on a ladder in my living room. I had to climb up onto a small balcony where there are two windows that I wanted to shut, which I do at the end of every summer. A ladder is the only way to reach them as the balcony is ten feet up (see left). However, when I had retrieved the ladder from my garage, the grass was wet and so the bottoms of my shoes became slippery. Yea, you know where this is going. When I lowered myself onto the first step of the ladder coming down from the balcony, my foot slipped. I twisted horrifically to the right, plunged downwards for what seemed an eternity and landed on my back with a cracking thud I will never forget. A sharp-edged table some eight feet below had broken my fall, but it was hardly helpful. I merely bounced off onto the hardwood floor. 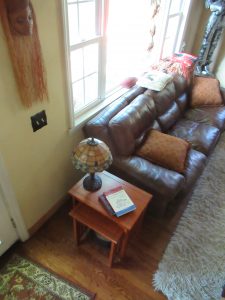 As I lay there, the pain was frighteningly intense. My first thought was that I had broken my back. And what a terrifying thought! I couldn’t breathe. I was afraid to move. Like a ball that had suddenly deflated and couldn’t re-inflate, I was gasping for air and crying out in despair for what I had done to myself, over and over the same words, “Oh, No! Oh, No!” I was shocked and so angry!

Gradually, I tested my spine and limbs as my breath slowly came back. As it turned out, I think I landed at an angle and in a spot that actually absorbed the impact in the best way possible. Had I landed on my feet, or my head, or in a different location on my back a few inches either way, I wouldn’t be writing these words. I would be in a hospital, or maybe a morgue. Eventually, I got up off the floor and carried the ladder back to the garage, almost as if to test that I was truly Okay. “Climbing the ladder” can be hard, but falls can kill you.

The day before, I was backing my Pickup out of the driveway when the brakes went out. Saturn, where are you when I need you? Apparently, there had been a leak in a frayed hose that feeds fluid to the brakes, and finally they just stopped working. So, my truck drifted a few feet and crashed into a stone wall on the other side of the street. Hello Saturn, nice to see you again. My truck was going slow, so there was no damage to me or it. However, can you imagine if my brakes went out as I was driving in traffic or going down a hill? It’s certainly more likely it would have happened then. The time it takes me to back out of my driveway is mere seconds; yet, I’m out in traffic for hours and hours. And I live at the bottom of a long, steep hill that ends in the Connecticut river. Why did my brakes go out precisely at that instant when I was least in danger? And why didn’t I break my back when I fell off a ten-foot ladder and landed on a table?

I think about these things. It’s not the first time I’ve had good luck with my bad. After a while you notice a pattern, and it’s undeniable. Something unwanted happens, but circumstances are such that it could have been a lot worse. In fact, there’s a far greater likelihood that it should have been much worse. I truly believe there’s a guardian angel looking out for me. And if I have one, it must be that we all do.

I’m not sure what part Saturn is playing in all this. It turns out that my truck not only needs a new break-fluid hose, its structural frame is corroded and unfixable; so, it’s going to be retired and I intend to buy a new 2019 Ford Ranger, which will definitely be an upgrade from my dilapidated, worn out 2003 version. Saturn likes upgrades; in fact, demands them, constantly. When structures break down, they need to be repaired or replaced. And I’ll be sure to bring my new truck in for required servicing on schedule, as Saturn requires, which I hadn’t done with my old Ranger (hence, the frayed break-fluid hose). Saturn seems to be warning me, “Stay focused and be responsible. Stick to your schedule. Put the brakes on when necessary.”

Regarding the ladder, perhaps the lesson is that life is full of ups and downs, and one should be prepared for both. Obviously, this has career implications that go far beyond climbing ladders. Also, Saturn rules gravity (being itself “grave”), and there’s nothing like gravity to remind you of your limitations. I had been climbing that ladder to shut those windows for 12 summers and had always imagined what I would do if I fell. “I’ll be alright,” I told myself, fantasizing how I could adjust my body in mid flight to break the fall in any number of ways. The reality, however, was a bit different than my fantasy. How many times have we heard the line, “It all happened so fast, I had no time to think”? Now I really know what it means. Turns out I can’t fly. Reality can be a bitch.

The upshot is that I lost control. Again, the lesson seems fairly obvious: “Take it slow, be patient, and exercise due caution,” all of which I neglected to do when I took that first step onto the ladder from my balcony. I got reckless, and Saturn’s not down with that―though you may soon be, if you know what I mean.

Still, I’m in one piece, so I will count my blessings, with Saturn’s lessons among them. After all, it could have been a lot worse.